After a couple of thematically challenging reads, I will freely admit that it was nice to spend a few days back in the land of Kindle popcorn.

I know it may not be the most usual approach to deliberately spread out the books in a series like I’m doing with Meyer’s Magic 2.0—I imagine the more intuitive choice for most readers would be to read the series all in a clump together. But this approach is working for me. In part because it allows for the occasional popcorn palate cleanser when I need one. In part because I remain sufficiently lukewarm on the series that I wouldn’t want to read only these books for any particular length of time.

Spell or High Water* continues the saga of Martin, computer hacker and time travelling wizard. In this volume, Martin and his best friend Philip are summoned to be the representatives of their enclave of Medieval European wizards in a conference gathering members of wizard “colonies” that have settled all around the globe and all throughout different eras of history. I’m not even going to try and explain the purpose of the gathering, since it’s little more than a conceit on which to hang this book’s collection of nerd jokes and hijinks. 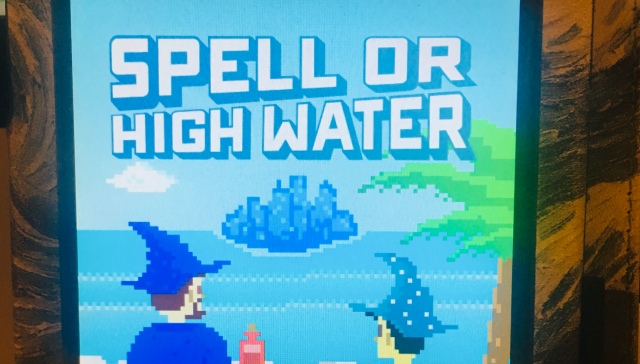 Overall, I had the same “It’s fine” response to the book’s overall quality. But there are some sharp distinctions where I think this book is more successful than the first in the series: and, conversely, places where I found it less successful.

Let’s start with the good news. First off? First impressions. I know this is is an incredibly superficial criterion, but the 8-bit style of the cover art here is so much more in tune with the series’ ethos than the first book’s animated drawings. Moving beyond shallowness and vanity, I appreciated how I was able to navigate this book rooting for my protagonists throughout the course of action, instead of having to put up with Martin’s early douchebaggery in book 1. I also enjoyed some of the ways Meyer was willing to play around with questions around time loops/paradoxes and free will. Meyer was even able to plant a couple of plot/character seeds (Roy and the Victorian magicians, especially) that having me looking forward to learning who’s story gets told in book #3.

On the less successful front…. I hate, hate, hated the return of Jimmy’s character. I hated having to cut away from the main story to deal with this B plot, I hated spending time with all the differently unappealing characters in that B plot, and I really hated the shock-twist ending Meyer shoe-horned into its denouement. It also felt just a little bit too much like a slog to get through the book. Part of it was the way the cuts to the B plot kept eviscerating any sense of momentum being built up in the main story trajectory. But even beyond that, I just couldn’t fully invest myself in the sense of much being at stake here. Meyer did his best to point out ways that these supposedly-immortal wizards might actually be at risk during such-and-such an event, but, honestly, I just read that all through the lens of “Well, he’s trying to up the stakes, but no one’s in any real danger here.” And they weren’t.

* At least this iteration of the title—there will be another down the road.

** Probably. I have some hefty titles coming up in my March & April schedule, so I may be so hard-pressed just to keep pace that I postpone the third book of this series until May or June.

One thought on “Spell or High Water by Scott Meyer”