I mentioned last night that I have some hefty books coming up in my March and April challenge schedule. However, my first March book is a wee one, so I’m trying to knock out a couple more non-Around the Year titles in this liminal time when February turns to March. This novel by Rainbow Rowell is one of those quick reads I’ve squeezed into here.

As a fan and frequent-enough reader of YA, I’d heard Rowell’s name along the way, some years ago. I’d even heard of her debut novel, Eleanor & Park, and how incredibly well-loved (and critically well-received) it is. But I never got around to reading any of Rowell’s work until last year,* when an ampersand challenge category led me to pick up the famed debut.

Alas, I ended up being a bit of a contrarian with Eleanor & Park. I really enjoyed Rowell’s authorial voice and her references to 1980’s pop culture. But there was a lot in the core characterizations and plot motions that rang a bit too false for me. Still, I enjoyed Rowell’s authorial voice enough that I was perfectly happy to select her second novel to fill one of 2019’s categories.

Turns out I like the slightly less popular book more than the super-popular one.

Fangirl follows the experiences of Cather during her freshman year of college. Cather suffers from some combination of shyness, anxiety, and the lingering trauma of having been abandoned by her mother at the age of 8. Up to and through high school, Cath has been near-inseparable from her twin sister, Wren: sharing a room, clothes, and a writing partnership around creating Simon Snow fanfiction. 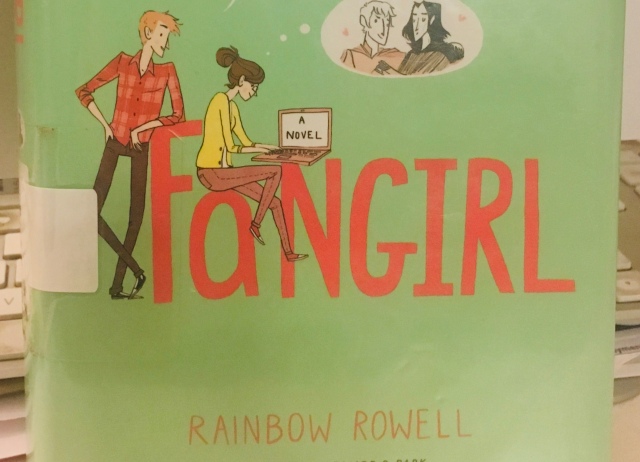 (Simon Snow is clearly a Harry Potter analogue for this fictional world: an incredibly popular, world-wide phenomenon of a series of children’s/YA books about a young lad attending wizard school and having to routinely save the world from its Big Bad.)

With the transition to college, Wren is trying to separate herself from Cath, and we listen into Cath’s head as she negotiates the pain of this separation, her anxieties, her slow progress in making friends and finding first love**, and the challenges she faces in trying to  balance academic responsibilities–especially a challenging fiction writing course–against family drama and the effort to complete a long-form fanfic (that has become a phenomenon in its own right) before the last official book in the Simon Snow series is released.

I think I liked this book better than Rowell’s debut novel because, in addition to being about first love, Fangirl was about Cath’s love of writing and of creative expression, and also about the nerdy sorts of fandom-love that have been so much a part of the fabric of my own life. Rowell’s exploration of the craft and work of writing resonated for me, as did the acknowledgement of the various ways we writers can psych ourselves out as being not good or talented enough.  I also found the interpolation of Simon Snow quotes—both from the “original books” and from Cath’s “fanfiction”—to be a charming feature of the novel.***

Finally, I think Rowell did a good job sensitively handling the material of having characters with mental illness: not sugarcoating the real challenges those conditions create for those of us living with them, but also allowing the characters to be fun, talented, flawed, worthwhile human beings.

* I think this is one of the key things that marks me as a casual rather than a serious fan of YA. I’m always happy to rotate YA titles into my reading list, but I make, like, zero attempt to stay abreast of trends, new titles, or award winners.

** I so want to say something snarky about this unavoidable first love trope, but that’s what I get for reading YA novels. Truly ubiquitous.

*** I will, however, admit to some confusion around Rowell’s decision to have her Potter analogue and Harry Potter himself exist in her novel’s world. Is Rowell trying to suggest a world where Harry Potter was published but where Simon Snow got all the publicity? Or does she imagine J.K. Rowling and Gemma T. Leslie (Simon’s supposed-author) in an ongoing tussle for the wizard crown?

One thought on “Fangirl by Rainbow Rowell”