This was a slight deviation from my post-pre-diabetes-diagnosis plan to focus on reading only those challenge books that were already in my possession. When I made that course correction, I’d forgotten that right at the start of 2019 I’d put my name on the waiting list for the library’s e-book copy of this title.

So, when my name finally reached the top of the list a couple weeks ago, I decided just to roll with destiny and give myself the pleasure of reading this. (A bird in the hand and all that…)

I’d already had Cooper’s memoir/social analysis on my reading wish list since mid-2018, on the basis of the good press and positive reviews the work was getting. In complete candor, for all that I went into my 2019 planning with the supposed goal of drawing primarily from my own library, this was a title I wanted to shoehorn onto my 2019 list, come hell or high water.

Lucky for me, it wasn’t all that hard to find a place for Cooper’s book. Between the callout to the New York Public Library staff picks and the invocation of celebrity recommendations, I was golden.(1)

This collection of essays kind of straddles the line between social analysis and memoir. The chapters are arranged primarily around a thematic build of Cooper’s conceptual priorities, with autobiographical reminiscences woven throughout in a decade-jumping, non-chronological fashion. Despite the non-chronology, Cooper makes a principled decision to put the emphasis on showing how her lived experience has led her to certain socio-conceptual analyses, rather than staying rooted solely in the abstraction of theory. Cooper’s Black feminism, as shared here, is a fully embodied set of convictions. And it is a feminism that puts Black women’s perspective and experiences at the heart of Cooper’s analysis in a way that so rarely happens in mainstream (white) feminist and (patriarchal) anti-racist discourse. 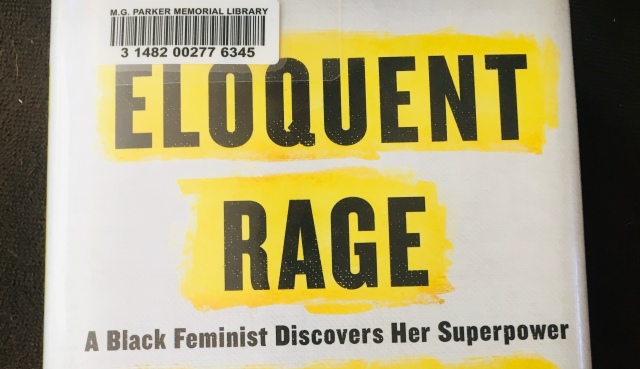 The full title of Cooper’s book—Eloquent Rage: A Black Feminist Discovers Her Superpower—highlights another key feature of Cooper’s Black feminism: the explicit reclamation of the “Angry Black woman” trope. Cooper digs into the ways that the cultural patterning of interpreting any level of Black female anger as “dangerous” or “unacceptable” is a way to tone police Black women into submission to the kyriarchy.

We live in a nation that does everything to induce our rage while simultaneously doing everything to deny that we have a right to feel it. American democracy is as much a product of suppressing Black rage as it is of legitimizing and elevating white rage. American democracy uses calls for civility, equality, liberty, and justice as smoke screens to obscure all the ways in which Black folks are treated uncivilly, unequally, illiberally, and unjustly as a matter of course. (p. 169)

Rage, Cooper acknowledges, can sometimes be destructive. Or, when directed in unfocused, individualized ways, its impact can be minimized. But, she argues persuasively, collective rage and collective action can be a powerful force to change the world for the better.

(1) Yes, I am perfectly comfortable talking about Emma Watson as a celebrity I admire. A fact which shouldn’t be very surprising to long-time JALC readers.