Last night I wrote about Emma Watson’s speech at the UN on Saturday for the launch of the HeForShe campaign — generally applauding it all, but doing my usual unpacking-complicated-things routine.

What I didn’t talk about* was the fact that when I clicked on the link to the news story/transcript of the speech, Facebook offered up two “related links” for my consideration.

One was the actual site of the campaign, which made sense to me. The other was a fashion report on what Watson wore to Saturday’s event, which made my blood boil.

She means business! Emma Watson is smart and sophisticated in belted white coat dress at UN event in role of Goodwill Ambassador For Women 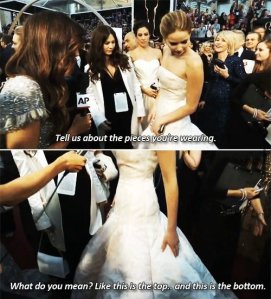 that is breathtaking in its glib reduction of a committed young woman’s activism down to Barbie-doll status,** The Daily Mail provided fashion details not only of the outfit Watson wore when giving her speech, but also the evening ensemble she wore at a later event celebrating the launch of the HeForShe campaign.

Now, as I understand it, the Daily Mail is a notorious rag, so there is a certain element of “consider the source” in all of this. Still, there’s something extra foul about taking a speech in which Watson talks about the experience of having been treated as a sexual object by the press from age 14 onward as one of the determining moments in her path towards feminism, and then reporting on that speech through the same old lens of fashion obsession.

And, no, fashion obsession and sexual objectification aren’t exactly the same thing. But there’s a fair piece of overlap between the two — something acknowledged by designer Norma Kamali in her project Stop Objectification. So I don’t think it’s over-reading to point to the horrible implications of how this line of reportage erases the actual content of Watson’s message in order to re-affirm the dominant patriarchal narrative of judging women in the public eye for their fashion cred — and by extension, their “attractiveness” and/or fuckability.

In other words: we’ve all been here before. And the more things change, the more they don’t.

* Because a 1,400-word post was quite long enough, thankyouverymuch.

** As in, where the only thing marking one’s professionalism is being able to dress the part.