The doctor’s office that prescribed my HCG gave me a booklet to help me track all kinds of things. Portions of food, my water intake, supplements, ketosis level — and, yes, a daily weigh-in.

I’ll admit, I toyed with the notion of skipping that last piece. Ultimately I decided I wanted to respect the protocol in every possible detail. Including weigh-ins: even if I have all kinds of associations between morning weigh-ins and the evils of the diet industry, I’m willing to take on this task in the context of tracking my weight as one among a set of data points. 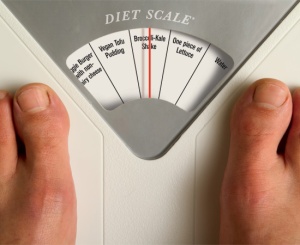 So I dragged the scale out of the basement* and threw it into the bathroom, where it and I have been having a daily, emotionally-guarded, one-on-one.

As I expected, this detox process has meant that my numbers on the scale have been going down, a little bit each day. And, as uncomfortable as it is to admit, there’s been part of me enjoying that trajectory. I spent so many years being brainwashed around the value of skinny** that I know there’s part of me that can still fall into that old model of thinking.

Aside from that, there’s been some concrete benefits. Some of my slacks had started getting a bit tight in the past few months, and even though I would have been 100% willing and unashamed to buy a larger size if need be, I can’t deny that I’m glad not to have to spend the money and to instead be feeling more physically comfortable in my current wardrobe.

I was having a similar issue with my wedding rings feeling a tiny bit tight and uncomfortable, and it’s especially nice for those to be back to fitting better.

Anyhow, today, I had my morning date with the scale and the numbers were exactly the same as they were yesterday.

This is entirely unsurprising. All the information about HCG — even from a weight-loss perspective — talks about the inevitability that some days your weight will “plateau” instead of being lower than the day before. I kinda think the diet guides make a really big deal out of this possibility just so someone doing HCG for the purpose of weight loss won’t freak out when this occurs.

But it was fascinating to witness myself when this moment occurred. In an instant, I could recall all the old tricks I would have used, back in the obsessive-dieting days, to make the scale move in a good direction. Maybe I should weigh myself starkers, or try again after another trip to the toilet.

For all that I was able to recall the ways a “plateau day” would have thrown the old diet-obsessed Sherri for a loop, perhaps the most surprising thing about this morning was really how little emotional charge today’s date with the scale held for me. I saw the numbers, saw all the possibilities for being negatively impacted emotionally, and just felt fine.

Almost like my weight is just another data point for me.

* And why did I even still have a scale? For the always-important job of checking to make sure my luggage is under the airplane weight limit.

** Oh who am I kidding? From a cultural messages standpoint, I’m still being brainwashed about the value of skinny. We all are.

Image credit: http://simplykierste.com/2013/01/fit-friday-with-erica-the-scale-friend-or-foe.html (And yes, this was a very deliberate choice…)

One thought on “Data Points”