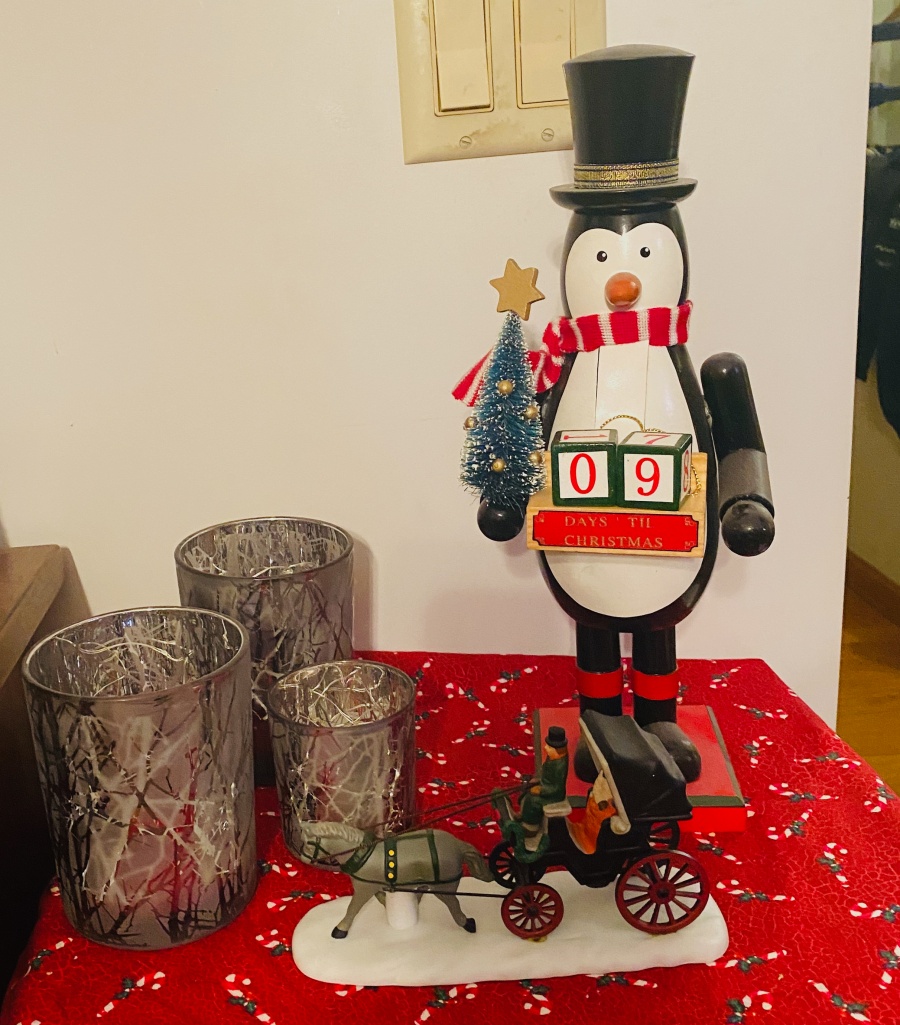 I’ve already talked about my tendency for doing it kind of big for Christmas/Yule decorating. Part of that embarrassment of riches is not one but two different Advent calendars.

One of these is the traditional “Advent tree,” where you hang a different ornament on days December 1 through 24. You will note that our ornaments do not so much get hung up as they are magnetically affixed to said tree….

The other one works more like this perpetual calendars do. You know the ones that have the blocks you rotate around to show the day, date and months? Here’s an example:

Our is simpler: no months or days, just number blocks we can rotate and re-arrange to count down from 24 to 1 as we go through the month of December. It’s also cuter, since the numbered blocks are held by a dapper-looking penguin in a top hat and winter scarf.*

I haven’t touched the Advent tree since I (magnetically) hung its final ornaments December 24th. But once the calendar turned over to 2021, I put the “countdown penguin” back to work.

He’s counting down days till the Presidential Inauguration of Joe Biden.

I’ll admit, though, I’m having all kinds of mixed feelings and anxieties about the Inauguration, as more and more information about the literal objective evil of last Wednesday’s insurrection comes to light.** For all that I was aware of the violence being fomented for the date Congress would be certifying the Electoral College vote, I had been astonishingly naïve in my unthinking enthusiasm for the traditional, big, outdoors in the public Inaugural ceremony.

Obviously, that naïveté has vanished over the last 5 days. Now I don’t know what I want for Inauguration Day next Wednesday.

There’s the part of me that still wants a gigantic outdoor ceremony. You started your blight of an administration by lying about your big dick inaugural crowds, Mr. Cheeto? Here, let Joe and Kamala outperform you and your Inauguration in every measurable way.

Kind of like a “middle fingers up in the air” moment, both against Cheeto POTUS and against all the seditious traitors that showed their ass last week. (Including and especially the electeds that instigated this treason with their extra-constitutional objections and even actively aided and abetted the attempted murder of Nancy Pelosi).

And yet: I won’t deny that I’m afraid of what violence might happen next week.

Part of me is thinking I’d just rather have a quiet, televised swearing-in inside the Supreme Court Chambers. (With the Supreme Court building itself being surrounded by all the National Guard members from DC, Virginia and Maryland combined.)

Yes, there would be some taste of giving into intimidation around that kind of change. Being driven from what is normal, unable to enact our customary ceremonies of transition.

But you know what? Nothing else has really been normal since March 2020, so I’m kind of okay with a bit of extended abnormality if it allows us to get through this transition safely and then to start building whatever our new normal is going to become.

Obviously, since I am not actually Queen of the Forest, I don’t have any influence over how next Wednesday’s ceremony unfolds—no matter which set of my mixed feelings ends up winning. All I can do is follow today’s #CalendarWisdom:

* I have a thing with penguins.