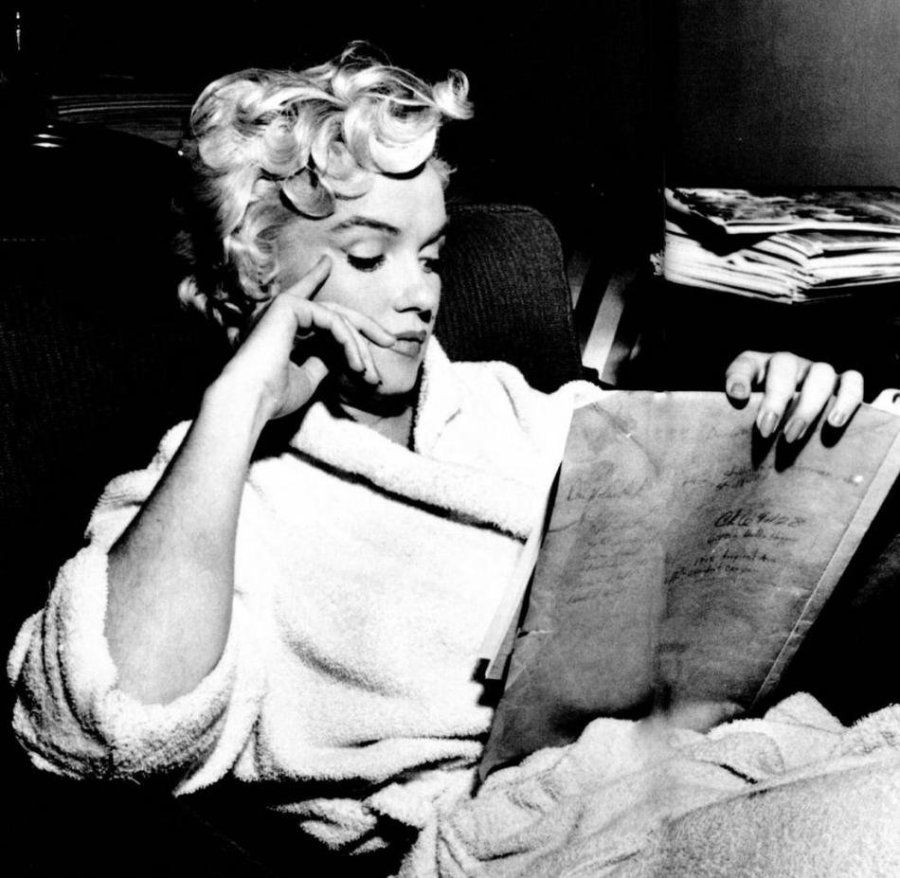 Unsurprisingly for me with a few days off, I’ve been doing a fair bit of reading. This latest book steps outside of my two main categories for 2020* to be part of the “books that randomly caught my eye” category that is always in play for me, year in and year out.

I stumbled across this book in a newsletter (weekly? monthly?) about new titles sent by a local indy bookstore. It may seem hyberbole to say I “stumbled across” something in a newsletter that I’m actively subscribed to, but I stand by my sense of fortunate chance here. Frankly, y’all, I hardly ever open those emails, so let’s just ponder the odds of me just randomly opening this middle-of-the-pandemic issue to see something so patently designed to catch my eye: a YA verse novel about Marilyn Monroe.

I prefer to think of it as a small, blessed piece of good fortune.

The title stayed on my mind until things with COVID settled down to the point where books could once again travel on interlibrary loan**, whereupon I put in a request for it, and then happily picked it up.

The book itself as a physical object is brand-spanking new (I’m guessing I’m its first library patron, though there’s no way of knowing that for sure) and shows some clever art design. The dust-jacket makes creative use of a hole-punch to let the book’s own black cover show through a super-close, partial portrait of Marilyn to replicate the signature beauty mark from which Weatherford took her book’s title.

(Alas, the necessities of library binding obscure this effect in my photo above. You can get a better look here in the Kirkus review of the verse novel.)

The poems themselves, are told in first person voice by Norma Jean/Marilyn herself, arranged in a simple flashback narrative sequence. The opening poem takes place as she is being sewn into the couture gown in which she performed her famous singing of “Happy Birthday, Mr. President,” an event that took place only a few weeks before Monroe’s 36th birthday and only a few months before her death.

As author Weatherford shares in an interview about the book’s primary conceit:

During that styling which required Marilyn to stand still for hours—thus the first poem’s title—I imagine Marilyn reflecting on how a former foster child born as Norma Jeane rose to worldwide fame.

Most of the poems that make up this narrative are in free verse, with a few interspersed poems that are rhymed or otherwise more tightly structured. Perhaps most effective of these structured selections is a six-line sock-to-the-gut, “Miscarriage Blues: Ectopic Pregnancy, 1957.” Weatherford also makes frequent use of list poems, my favorite of which, “Don’t Judge a Book by Its Cover,” actively works to blow up Monroe’s “dumb blonde” reputation by revealing the voracity of her reading—even with a diagnosis of dyslexia.

All together, the poems paint a complicated picture of a complicated woman—someone who was both victim of circumstance and also a savvy self-creator of her public persona and myth. Some poems express Monroe’s frustration with being typecast as a blonde bombshell, while others show her conscious creation of that persona, from teen years (“Junior High: Better in a Sweater”) to the height of her career (“The Physics of Ferragamos”), as well as her growing business savvy and artistic consciousness.

By necessity for this genre, Weatherford cannot cover every moment or detail of Marilyn’s life. Instead, the author has chosen certain emblematic moments as the doorways into Monroe’s self-reflections on her life’s themes, including mental illness, sexuality and sexual exploitation, and her unfulfilled yearning to become a mother. One review I found talks about the selection of these moments to be “quixotic” and “uneven”—but I disagree with that assessment.

As a film buff and amateur film historian, I can say with full confidence that the professional touchpoints are wisely chosen. As for the biographical moments, I’m choosing to trust the strength of Weatherford’s research insofar as the accuracy of those touchpoints—especially those during Monroe’s growing-up years and early adulthood, about which I know next to nothing. (Admittedly, most of these choices are kind of obviously important ones, too—Mom being institutionalized, getting married for the first time, getting your first modelling break, getting divorced for the first time, etc.)

Final verdict: I enjoyed it and whole-heartedly recommend. It made me enough interested about the woman behind the myth that I might add some legit biographies of Monroe to my reading wish list.

* Shakespeare and socio-cultural analysis, if you don’t want to bother following the link.

** Yes, Virginia, I am curious to know if this privilege will be rolled back once the inevitable post-Thanksgiving COVID spike occurs.

One thought on “Beauty Mark by Carole Boston Weatherford”