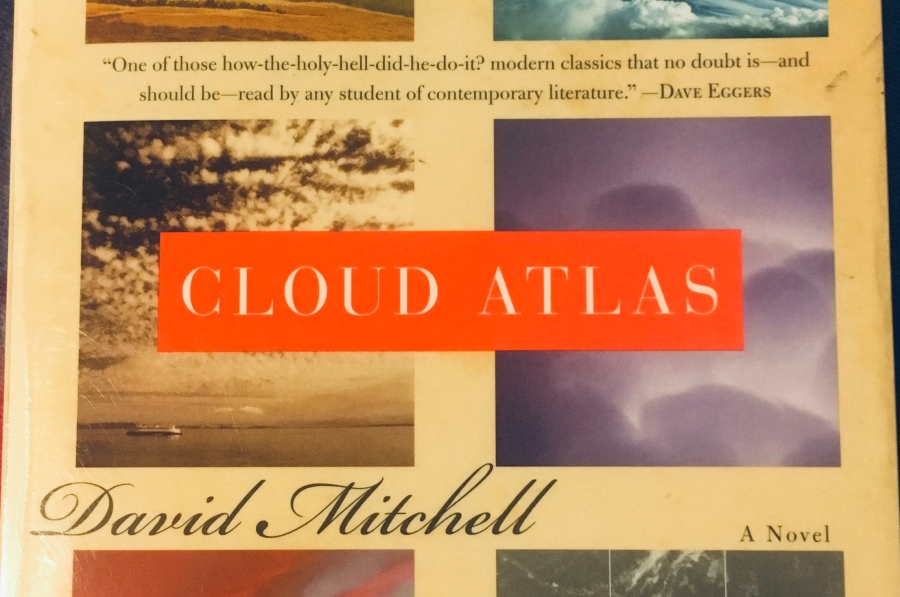 Golly! It has been a year and a day since I last posted here.

Well, I suppose that’s a bit hyperbolic(1): it’s been closer to two weeks. Still, that’s a long darn time to be inactive, especially when compared to the rest of 2019.

What can I say? Travel kicked my ass, the weekend workshop kicked my ass(2), re-entry kicked my ass. I have been seriously crawling into bed as early as I can every evening since I got home. Tonight is the first night I feel remotely awake enough at 20:15 to put hands to keyboard.

At least I did have some time to finish one of my challenge books during these days away from JALC: Cloud Atlas by David Mitchell.

This book also continues my unintentional tour of Man Booker prize books—although Cloud Atlas was only a finalist for the prize, as compared to the two prizewinners (Wolf Hall and Luminaries) I read earlier this year. Still kind of funny, how I keep choosing books for other reasons and still keep tripping over this particular group of prize-winners. 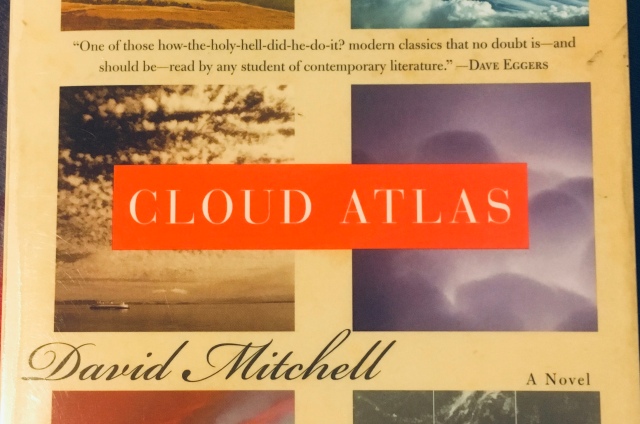 Anyhow, I don’t know exactly when this book hit my radar. I normally have enough of an eye on year-end “best” lists that I probably saw the title then. And of course, there was the movie adaptation back in 2012 which made me more aware of the novel’s interwoven, overlapping narratives. Which is the kind of thing that’s right up my alley.

So somewhere in this long unfolding, I snapped up the Kindle edition at some point when it was listed as a daily deal. I knew I’d get to it at some point, but it didn’t fit neatly into the categories during my last few years of challenge reading. This year, the “multiple POV” categories were a perfect match, so I dusted off these bits and bytes and settled in. Slowly.

It’s a challenging book, so it took me a while to read. A perfect Matryoshka set of nested narratives, Mitchell’s novel takes the reader from the colonial past to a post-apocalyptic far future, and then back again. The outer five narratives are broken abruptly in half, each in a fashion that is explained in the next section, when the new narrator explains the cause of the fractured past (a paperback torn in half, an incomplete stack of letters, a film interrupted midstream, etc.). There are other interweaves between these nesting-doll narrations: characters share the same birthmark and have flashes of past memories and future visions that flirt with the notion of reincarnation.

And yet, for all these interconnections, Mitchell is straight-up virtuosic in how he creates different authorial voices for each nesting doll—voices that are unique, vibrant, and help convey the atmosphere of each new time period. Guiding the reader into the rabbit hole and out again, if you’ll forgive a mixed metaphor.

Having said all these nice things about the novel, I will admit to some slight piece of emptiness when I got to its end. When all was said and done, it didn’t seem to me like the whole reincarnation thing had actually done anything thematically to aid the book. Kind of like the way musicians will add ornamental trills or melismas that don’t help the piece at all, and instead just serve as an ego-driven way to show off the musician’s technical prowess to be able to trill like that.(3)

And the moral epiphany that concludes the book felt entirely hollow, given the Matryoshka structure of this all. Remember that the book concludes with the end of its earliest narrative. Which means we’ve already seen the utter futility of what our young colonial explorer learns: we have toured the seemingly-inevitable spiral into greed, despair, apocalypse and beyond. And yes, the close of each nested narrative presents us, at the end, with the illusion of an intact human, but we know the tears and ash that already lay in the heart of the nested structure.

So, when all is said and done, this is a book that impressed the hell out of me. It’s a book I enjoyed from an intellectual, library-analysis, craftsman kind of perspective. But I don’t know if it’s a book that will live on in my heart.

(3) See: Christina Aguilera in most of her coaching sessions on past seasons of The Voice.