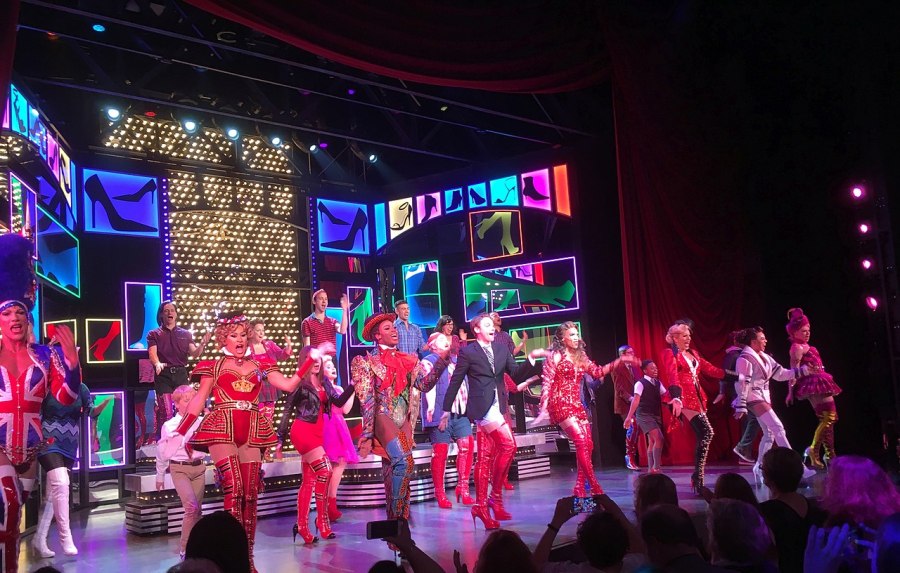 One of the lucky “extra credit” details of my NYC trip was that I finally had the opportunity to see Kinky Boots on Broadway. This was extra lucky because the Broadway run closed on Sunday, just 3 days after my opportunity to see and enjoy the show.

SIDEBAR: I talked to one of the ushers before the show to find out what show was next coming into this particular theater. Turns out it’s the new Moulin Rouge musical, which I was lucky enough to see during last summer’s Boston try-out. I’m not sure when I’ll have a chance to see the final version of that show, but I’m definitely intrigued to have the chance—someday—to compare the Broadway and Boston versions. /SIDEBAR.(1)

But, back to Kinky Boots.

I have all kinds of contradictory feelings about the show.

Strike that: I have a series of contradictory feelings that were prompted by me watching the show. So tonight’s post will basically be focused on the show itself, and I will hope to organize and express my internal conflicts in a different writing exercise on some future date.

As far as the show itself is concerned? It’s an unqualified rave from me.

For starters, the overall message of the show around acceptance and self-expression just warmed my heart. In a strange kind of sideways way, that message and the joy of this show reminded me very much of the vibe from seeing Head Over Heels last August. There were so many hilarious moments, from the opening “turn off your cell phones” message, to Lauren’s belter “History of Wrong Guys,” to the infectious joie de vivre that Lola brings into every scene of the show.

Speaking of Lola, I do not have enough superlatives to describe the beautiful mixture of boldness and exquisite delicacy that J. Harrison Ghee brought to this role. I knew, from being a run-of-the-mill B’way fan, that Billy Porter’s origination of the role was one of those lightning-in-a-bottle, instantly iconic performances that happens now and again. And, considering how my own personal love for Mr. Porter has grown in the past few years (hello, AHS and that Oscar gown!!), I halfway wondered, coming into the theatre, whether I’d be unfairly judging the Lola I saw on Broadway against some imagined “Porter standard.”

I needn’t have worried. Ghee’s performance was a masterclass of what happens when personal resonance, talent, and craft are interwoven to create a performance. Since last Thursday, I’ve done a little consultation with Professor Google and learned that Ghee has a number of close personal connections to the role of Lola. Ghee is the first real-life drag queen to play the role of this fictional drag queen; some of the dynamics depicted on the strained relationship between Lola and her father bear similarities to Ghee’s own childhood; and Ghee was touring the show in his home state of North Carolina(2) during the legislative battle over HB2 (the infamous “bathroom bill”).(3) These connections helped him bring so much to the role, and he left it all out on the stage.

Beautiful, beautiful show. I might even try to convince Mr. Mezzo to come see this when it tours Boston later this year.

(1) Does anyone even know what that end slash entails anymore? Yet another artifact of my age and the fact that my very first “pre-blog” was HTML hard-coded by my very own hands.

(3) Which detail is as good a reason as any to embed this completely gratuitous, completely delightful video featuring a different configuration of the Kinky Boots cast: