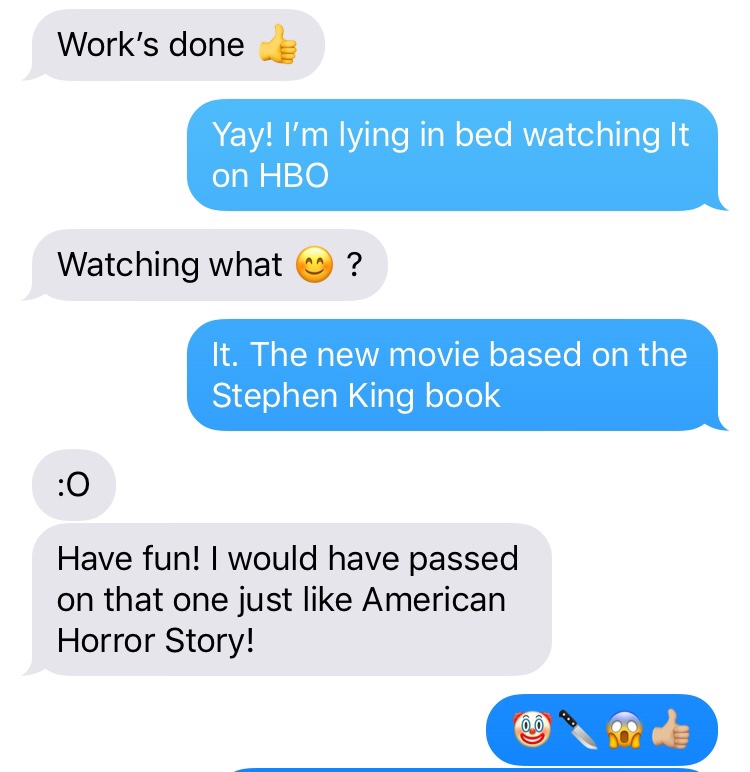 Watching Andy Muschietti’s adaptation of It wasn’t really on my plan for this week.

Some years ago, I gave up on Game of Thrones, but numerous conversations with different friends has convinced me to give it another chance. Since Season 8 is coming up soon, and I’m still back in Season 5, I thought one of my quiet hotel evenings this week would be a good time to log into HBOGo and start catching myself up.

Except, when I logged in Tuesday night, they had a feature card on content that would be leaving the app at the end of January, and I saw It on it.* Which got me thinking about how that sequel is coming out soon, too, so that meant it was another thing to catch myself up on.

Caution ahead! Here be spoilers!

I think I’m an atypical Stephen King “fan” insofar as I’ve seen more film/TV adaptations than I’ve read his books, and what books I have read were all read after viewing one of those adaptations. My path with It totally tracks that pattern: I watched and loved the 1990 TV miniseries (despite the anticlimactic giant spider at the end), then moved onto the book. Which I mostly enjoyed (despite the horrific gang bang trope), especially the greater depth around history, race, and culture that was infused into Mike Hanlon’s arc.

With all of that, I wasn’t sure I needed or wanted another take on this story. But there turned out to be enough positive buzz, both from critics and from friends, that I decided to put It on my long list of movies to see.** 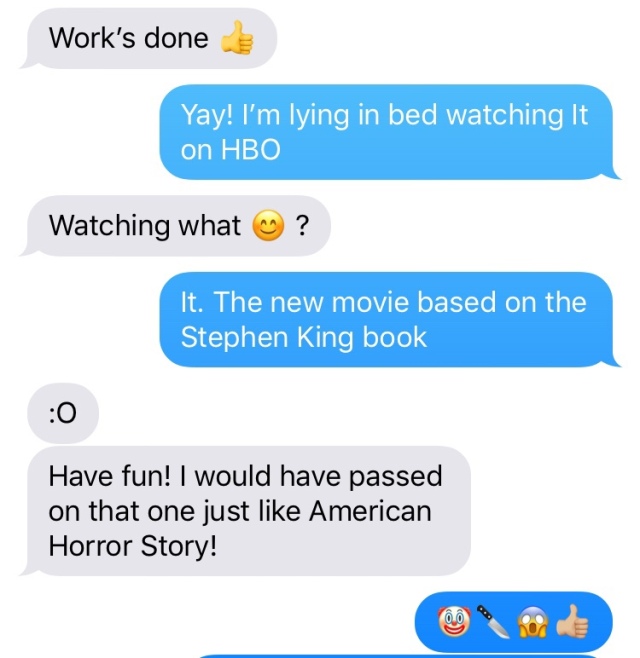 My overall verdict is a qualified thumbs up.

I’ll admit to holding some cynicism about how a key reason for this remake was probably the opportunity to take the bloodiness up a notch from that old TV interpretation. An aerial shot during the prologue shows Georgie’s blood pooling to cover most of the street where he is taken, and the bloody “balloon bubble” that splatters across Beverly’s sink in the TV version becomes a veritable geyser here, covering every surface in the bathroom (including poor Beverly herself).

But a lot of the “notching up” here is of the best kind. The kid-ness of these kids reads so brilliantly authentic, as does the brainwashed banality of indifference and evil that has infected all the adults in town. The sequences when different characters encounter Pennywise and are confronted with their fears are pretty uniformly powerful, and some of the themes around connection, friendship, trust, isolation and fear are given real depth.

Having said all that, there is one big piece of this adaptation that I hate with every fiber of my being: the removal of Mike’s role as historian, giving it instead to Ben.

I don’t know enough about King’s writing process to know how deliberate this was, but there is such metaphoric power in having Mike, the one African-American member of the “losers’ club,” carry this responsibility. Mike is the one to see through the myth of goodness in Derry, memorializing the ways that It’s evil has led to demonization of, and violence against, the perceived outsider. Obviously, this is most visible in the story about the destruction of the Black Spot, but there’s a way that Mike’s role as truth-see-er and historian also speaks to his capacity to see beneath the fog of American virtue to recognize our country’s original sins of slavery and White Supremacy.

I’ve heard that grownup Mike in this year’s It: Chapter 2 is still going to be the one who stays in Derry and holds the memories from Chapter 1. Separating his role as near-term historian from historian overall is just nonsensical. I’ve also read that Mike is going to be turned into a drug addict in Chapter 2, which is of those over-tired cliches that has every potential to go offensively, horribly wrong.

I hope that Chapter 2 handles these themes more responsibly than I fear it will. otherwise, the movie is going to make me feel very stabby indeed.

* No pun intended. It’s gonna be impossible to avoid this awkward phrasing entirely, though I will try to minimize it.