I expect it’ll take me a few go-rounds to figure out exactly how I want to format this year’s “book reviews,” but I’m pretty sure I’ll keep using the same primary components:

That last element is the least traditional, but I can’t see myself completely eschewing those sorts of stories. Especially when this first book has already gifted me with that kind of story: one about the power of unintended consequences.

I already wrote about how one of the enjoyable brain puzzles for me in planning this year’s lists was finding clever and/or elegant ways to carry titles across my lists of categories. Seeing two different categories having to do with literary prizes made it a natural combo: the Book Riot criteria were reasonably narrow already, but then I wanted to see if I could up the complexity by finding a non-fiction book by woman or AOC that won a 2018 award. Since non-fiction really is my favorite genre.

As I was poking around, I noticed that last year’s National Book Award in non-fiction was awarded to a biography of Harlem Renaissance leader Alain Locke, a book that was also written by a black man. Now, I remembered reading Locke’s anthology The New Negro back in grad school, so I was already interested in seeing the man behind the curtain, as it were. That interest was further piqued when the book blurb revealed a couple other themes that interested me: Locke’s childhood in Philly, and his efforts to negotiate public and academic life as a sort-of closeted, sort-of out gay man. “Perfect choice!” I thought to myself. “Put it on the spreadsheet.”

And then I went to the website to request the book via interlibrary loan, and saw that the book was more than 900 pages long.

And that, my dears, is the story of how I set myself up for a ridiculously ambitious start to my reading year.

As for the book itself, I’ve previewed a bit of my opinion when I was dealing with the guilt of reading “behind schedule.” This undeniably a dense, academic biography: lots of detail, lots of footnotes, lots of heady content–from distillations of the philosophical arguments in Locke’s graduate theses, to psychological analysis of Locke’s behaviors and motivations, to detailed shout-outs and allusions to the many artists, authors, and cultural figures who crossed his path. 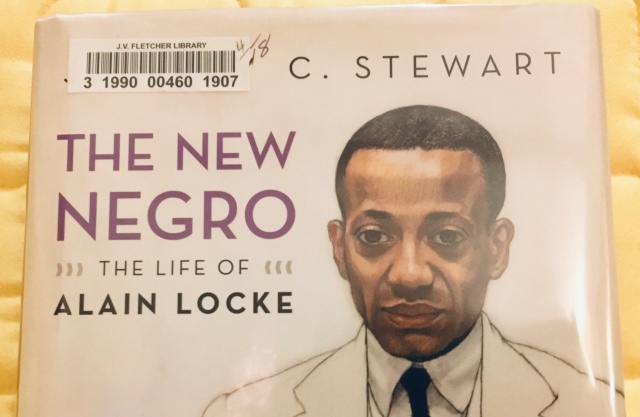 I am impressed with so many details of Stewart’s craft in this. For starters, of course, the research undertaking was undeniably massive. More importantly than that is the way that Stewart manages and presents this astonishing wealth of information. The ability he has to integrate intellectual content with more colloquial narration is something I sincerely wish I were better at myself. For example, I laughed with glee when Stewart spoke the simple truth of how Locke finished his overdue master’s thesis by shutting himself up in his apartment and “wrote his ass off.” And then when such relatable, everyday description was followed by a detail, intellectual–and clear–distillation of the philosophical argument Locke made in this thesis…. Well, my admiration for Stewart’s craft went pretty much through the roof.

I also appreciated the mixture of compassion and calling-out that Stewart brought to his discussion of Locke’s mistakes and flaws.

My one complaint is in the sometimes-repetitiveness of the details Stewart examines. Several times, some feature or key event in one of Locke’s relationships (particularly the contentious ones) would be described and analyzed multiple times, such as the March 1924 dinner which Locke emceed as a tribute to many writers in the burgeoning Harlem Renaissance, rather than as a celebration of Jessie Fauset’s novel There Is Confusion. Fauset held her displeasure about this mostly silent until a blistering letter she sent to Locke in 1933.

Now, Stewart tells us of Fauset’s displeasure and quotes this letter in the chapter about the dinner–and then summarizes and quotes the exact same material in the chapter that covers 1933 and the actual conflict that erupted between Locke and Fauset at that time. And I don’t really argue with that repetition: it’s relevant information in both moments, and dozens (hundreds?) of pages have come between these two passages. I would, however, have appreciated some explicit acknowledgement that this was something that had been discussed before. Instead, having these repeats presented as if they were new information gave me the uncomfortable sensation that we weren’t expected to retain anything from chapter to chapter while we read. And I’d like to think that I’m not the only reader out there who can recall when topics have been raised in previous chapters of a book. Even a dense, academic book like this one.

Still: highly recommended, if you’re up for it. The Nat’l Book Award was well-deserved, indeed.

2 thoughts on “The New Negro: The Life of Alain Locke by Jeffrey C. Stewart”