WordPress is doing a whole “Get Out the Vote” campaign.

We’ve teamed up with the good folks from The Pew Charitable Trusts, who, along with Google, and election officials nationwide, have developed the The Voting Information Project (VIP). Together, we’re offering cutting-edge tools that give voters access to the customized information they need to cast a ballot on or before Election Day. The Voting Information Project is offering free apps and tools that provide polling place locations and ballot information for the 2014 election across a range of technology platforms. The project provides official election information to voters in all 50 states and the District of Columbia and voters can find answers to common questions such as “Where is my polling location?” and “What’s on my ballot?” through the convenience of their phone or by searching the web.

I think this is a great idea, and will, in solidarity, present a copy of my favorite “Rock the Vote” video:

(Forgive me for sounding a tiny bit skeptical. You see, I downloaded the app that was developed by the Voting Information Project and so far have not been able to get any actual voting information keyed to my address. Instead it’s all “unknown error” messages, and a complete lack of help/user guides to aid me in making any sort of progress. I’m just homing the tools work better for other people with other addresses…) 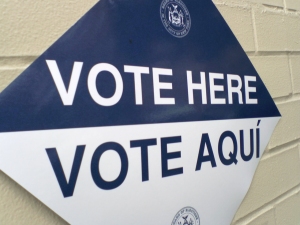 Luckily, I have enough Google skills to confirm that I am indeed registered and to seek out the location of my polling place for Tuesday.

I also received an oh-so-helpful postcard (sarcasm alert!) from America Votes, telling me I voted in none of the last four general elections here in MA. The postcard tells me this (non)participation rate is embarrassingly below average for people in my area, so I guess the America Votes people are trying to shame me into better civic participation.

Perhaps their campaign would be a bit more successful had they realized that the 2014 election is the very first general election that has occurred since I became a Massachusetts resident. I had a damn good voting participation record back in Philly, and I am honestly kind of pissed to have this damn non-profit talking to me like I’m some kind of slacker.

Disproportionate ire aside, the other piece about this being my first-ever MA election means I don’t hardly know half of the local and state-level candidates/issues. So I guess I’ll be spending tomorrow’s lunchtime and evening doing a super-quick study session with the Boston Globe’s voter’s guide.