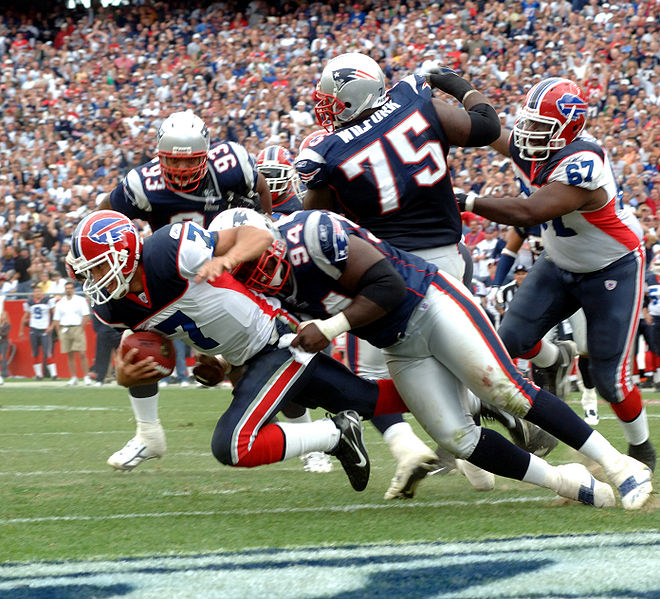 I mentioned recently that I’m a sports fan. I grew up watching Pittsburgh Steelers games on TV with my Dad, and then as the Bill Belichick era commenced, added the Pats to my regular Sunday rooting roster. I’m not the number crunching, stats analyzing, fantasy football-playing kind of fan, but I know my linebacker from my running back, and I can get passionate enough during a game to yell at the television set — as if my voice will magically fly through the ether to affect play in favor of whichever team I have labeled to be “the good guys.”

I mention all of this because I am still wondering about the ethics of what we choose to watch — only this time, I don’t have the benefit of getting all up on my morally superior soapbox like I did last night. Tonight, I am contemplating my own complicity in supporting the NFL’s culture of violence and misogyny.

Since I am writing this late-at-night post-choir, I’m going to try and be more concise than usual and skip the heavy citations. This line of thought has certainly been pushed forward by reading Jeb Lund’s essay in The Guardian, “Does watching the NFL make you evil?” (Yes — yes, I’m afraid it may.) In addition, one or two of the articles I linked last night had some larger-context discussion and statistics about the NFL that I expect to be drawing on in a rough-paraphrase kind of way.

It’s highly likely that at some point I’ll circle back to this topic for a longer and more thoughtful post. However, I needed to say at least a small something about this tonight, because it just felt so damn unethical to leave last night’s scold hanging in the air without at least some small demonstration of willingness towards self-reflection rather than superiority.

So here’s what I know, off the top of my head. By watching football games and adding to the ratings, I support the NFL machine. And let us remember that this is a machine that:

1. Promotes a vision of hyper-aggressive violent masculinity. My friend Alice recently described football as a form of “gladiatorial combat” — and that wasn’t the first time I’d seen an analogy made connecting Lincoln Financial Field and the bread and circuses of Ancient Rome.

2. Spent years concealing the brain injuries being inflicted on players. Lund’s article reminds us that even though there’s been lots of  fanfare around creating a punitive mechanism for players making “big hits,” it’s actually the “low-speed collisions” that happen to every damn player on every damn play that are causing the greatest damage. And some of the effects of this kind of brain damage can be to lessen someone’s capacity for anger management and impulse control.

3. Is misogynistic and undeniably invested in reducing women to the status of sexual object and/or trophy. I invite you to consider NFL cheerleader culture. Or Ben Roethlisberger. Or the factoid, buried in one of last night’s linked articles, that of the NFL players who have arrest records, almost half of those arrests are for domestic violence incidents — and yet there was, to my knowledge, no league policy or resources for domestic violence until about 2days ago when the video was leaked and public outrage became deafening..

And, thinking for a moment about Ray and Janay Rice, Lund also reveals some key details about that original, obscenely inadequate 2-game suspension stemming from that particular instance of domestic violence:

[NFL Commissioner Roger] Goodell reduced the potential suspension after interviewing Rice’s wife Janay in the same room with him, his team’s president, his team’s general manager and two other men, in violation of what even a semi-interested fan of Law & Order: SVU could tell you is the humane way to encourage a battered woman to feel safe and speak honestly about her situation.

Now, none of these three machine parts are offered in any way as if to justify or excuse Ray Rice’s actions in assaulting his then-fiancee. At a fundamental level, the choice to behave abusively is a choice and the individual who abuses another human being must bear the final and moral responsibility for that choice. Nonetheless, I can’t help but think about all the ways the NFL machine and NFL culture serve as contributing factors for assaults such as this one.

And these three pieces of the NFL machine most relevant to my current area of self-refelction don’t even hit everything there is to be concerned about! Blatant homophobia. The ongoing dedication to use ethnic slurs as a franchise name. The list goes on and on.

And yet, I have remained part of the audience. Like Lund,

I will probably watch over 300 hours of this game before the postseason starts. Because I am stupid, and because I tell myself that the bargain I have struck where I am not a Nielsen household, and I buy no tickets or cable packages or merchandise is enough. And nothing will change, because NFL ownership and their hollow-hammered lickspittle Roger Goodell know that millions more will strike similar, smaller compromises.

This is what is what complicity with misogyny and violence against women looks like.

This is what my complicity with misogyny and violence against women looks like.

One thought on “The Ethics of Looking, Part 2”