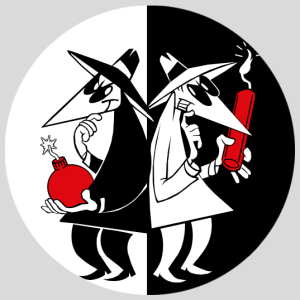 There’s times when I feel as if, when writing my “flagrantly feminist” posts, that I’m veering uncomfortably close to dividing the world into two teams: men as the “black hats,” the villains, the aggressors, the colonizers; and women as the “white hats,” the heroes, speaking truth to power and conscientiously standing up for what’s Right and True and Good.

And if I’ve ever implied that I’ve sorted the world into those two teams, please let me say clearly for the record: that would be bullshit, ’twere I to do so. Unmitigated, odiferous bullcrap.

Though I can see how it might happen. When discussing these sorts of subterranean, miasmic* cultural patternings, I struggle with finding the balance between communicating how steeped in the patriarchy we all are — the ways that patriarchal assumptions and privilege can run so deeply and unconsciously in our individual and cultural bloodstream that those assumptions set the boundaries around what it is even possible to imagine. It’s a little like that thing Anita Sarkeesian said in the video I was writing about Thursday night:

What does it say about our culture when games routinely bend or break the laws of physics and no one bats an eye? When dragons, ogres and magic are inserted into historically influenced settings without objection. We are perfectly willing to suspend our disbelief when it comes to multiple lives, superpowers, health regeneration and the ability to carry dozens of weapons and items in a massive invisible backpack. But somehow the idea of a world without sexual violence and exploitation is deemed too strange and too bizarre to be believable.

So there’s times when I want to communicate the almost-in-the-essence of things nature of patriarchal privilege: the ways that anyone read in the culture as “male” will toujours deja be the recipient of certain societal advantages over anyone read in the culture as “female.” That’s just how patriarchal privilege works: it’s always already happening, in a similar vein the way that I am toujours deja a recipient of race privilege on account of being white.

BUT. It’s good to be aware of the ways that by emphasizing the always already nature of male privilege, I’m giving short shrift to the variability that exists within gender itself, including trans and genderqueer communities. Emphasizing the miasmic nature of patriarchal privilege also runs the risk of implying that everyone who’s a beneficiary of that privilege accepts those advantages complacently, without comment or question. These are the implications that shift an examination of privilege and the patriarchy into a reductive black hats/white hats narrative.

So I want to follow up on Thursday’s post about gaming and misogyny by thinking a little bit about some of the men’s voices I’ve seen writing about Sarkeesian and her work from a feminist ally perspective.

First to  my attention (due to my own fannishness) was a series of tweets by Joss Whedon, reported here in The Mary Sue.

Watch the @femfreq #TropesvsWomen vids. Even if u think u get it, the sheer tonnage makes misogyny seem newly appalling.

The replies thread on this tweet is a schizophrenic mix of folks agree with Whedon’s perspective and the kind of hate-mongering we’ve come to expect. (As The Mary Sue so aptly summarizes, “in the oh-of-course sense, not the this-should-actually-happen sense.) To which (the hate-mongering part, I mean), Whedon further replied:

I watched a bunch of women get sliced up in video games and now I'm watching it on my twitter feed. @femfreq is just truth-telling. Deal.

Well-known game designer Tim Schafer also posted endorsements of Sarkeesian’s work,** while Tim Colwill, Editor-in-Chief of games.on.net posted yesterday about the Sarkeesian maelstrom and other similarly misogynist events in recent days (a good summary can be found here in Polygon), laying the groundwork for this declaration:

I’m asking politely. You’re free to think whatever you like and to complain about whatever you like, but do it somewhere else. Comments are closed on this article, because this isn’t up for debate. I’m not seeking any input on this, or any carefully worded thoughts on how we need to take these concerns seriously or to hear “both sides of the story”. As long as I am in charge of this ship, I will happily admit to pushing an agenda: I want better representation in games. That’s my agenda. That’s our agenda.

There’s also been some really high-quality, incisive cultural critique around all of this offered by Tauriq Moosa in The Daily Beast and Ian Steadman in NewStatesman. I’m not going to do my own springboarding off those essays right now — I’m trying to learn how to write shorter (but perhaps more frequent) posts, so now’s as good a time to start that experiment as any.

Now by highlighting men’s voices in this cultural happening, I know I’m dancing dangerously close (if not all-the-way into) white knight/white saviour and #notallmen territory. It’s territory I’m thinking about, and I can see myself spilling more digital ink on the topic in future posts.

For the time being, I’ll just say that, however delicately handled it needs to be — and it absolutely needs to be handled delicately — I do see a value, even a necessity, around everyone taking on the project of dismantling structures of privilege. Even (especially?) those who are the beneficiaries of said privilege. To quote Moosa:

It’s about people helping other people because it’s right thing to do: standing in support of targeted individuals because they deserve our support. . . . It’s wrong that the only men’s voices that are loud are the ones shouting women down.

Image credit: “spy vs. spy” by ragdollnamedgary, shareable via a Creative Commons License (retrieved from http://bordieri.deviantart.com/art/spy-vs-spy-29493368 )

One thought on “The Games We Play”