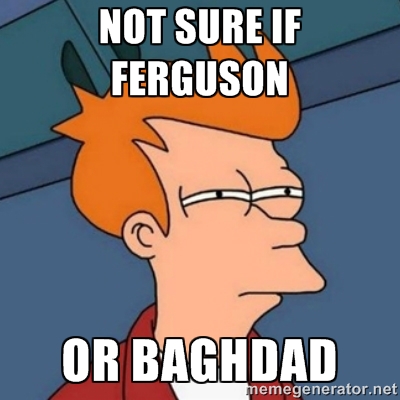 Last night when I was writing about the ALS Ice Bucket Challenge, I toyed with the notion of posting links to some of my favorite videos of celebrities doing the challenge. I decided against it for a number of reasons — my favorite celebrity may not be yours, and besides, anyone interested in looking up their own favorite celeb’s enactment of the challenge can do so with their own visit to Professor Google’s office hours (24/7, don’tcha know!).

But there was one video that stopped me in my tracks and that I had to share.

Orlando Jones explains in more detail on his Tumblr page:

I am, of course, talking about the disease of apathy.  If (and hopefully when) Michael Brown’s killer is brought to justice and convicted of 1st degree murder, it still won’t prevent this from happening again. We cannot accept this as the status quo. We MUST continue the fight at the ballot box, in the media and by working to create systemic change. I’m not naive to the dirty politics (redistricting, voter ID requirements, etc) that will try to prevent us from our goal. But I refuse to give up hope. My “bullet bucket challenge” is not about pointing fingers and it’s not about being angry. Every shell casing in that bucket represents the life of someone who fought and died in the goal for civil rights and human dignity. As a member of law enforcement (yes I really am a reserve sheriff) I will not stand idly by while others violate civil and human rights under the cover of authority and I will insist that other good cops rise to the same standard as well. As a black man I will demand more from myself and my community. I will not allow outsiders to co-opt our struggle in order to commit violence in our name. I’m channeling my outrage into action so I no longer feel powerless. It’s not about black or white. It’s not about rich or poor. It’s about us vs. them. There are more of us — from all races, genders and identities — then there will ever be of them. And we will be victorious.

“The hottest places in hell are reserved for those who, in times of great moral crisis, maintain their neutrality”

And no, I’m not so entirely vapid that it took one of the stars of Sleepy Hollow to get me thinking about events in Ferguson, MO.  I even made a small post about the topic, a week or so ago.  However, I very much focused on one Pollyanna bright spot in the midst of everything — and events have certainly moved on apace since that moment of hope.

And I stayed silent. Not because I was completely oblivious to the unfolding events. Since multiple news sources — including Digiday, TechTimes and the Washington Post — have explored why there is such a sharp differential between what shows up on Facebook (ice buckets) and Twitter (police violence in Ferguson), and since I am about 20,000 times more active on Facebook than I am on Twitter, you might think that my silence was caused by obliviousness.

But no. Whether it’s the political progressiveness of most of my Facebook friends, or my own habit of posting/liking/commenting on politically progressive content and articles, or some combination of the two, Ferguson has never been entirely off my Facebook feed. And since I am also one of those old geezers who still uses traditional news channels (TV news, magazines, etc.), there’s been that avenue for continued awareness, too.

But I stayed silent. I didn’t know what I had to say that would be insightful or of value. I was painfully aware of the depth of my white privilege, and deeply afraid that I might say something ignorant, embarrassingly naive, or just generally bone-headed in its/my privilege-blinders. And so I stayed silent.

But I cannot be silent any more.

I can’t tell you exactly what pushed me over the line. Orlando Jones’ challenge/invitation. The infuriating news that, at least as of the time this article was published, the amount of donations for Officer Darren Wilson surpass those for the Michael Brown Memorial Fund. Perhaps it was the stark reminders of how appalling strong the strands of racism run in society: a society where people will misattribute the fraternity handshake of a uniformed officer (none other than the same Capt. Ron Johnson I wrote about last week) as “gang signs,” and where a CNN anchor wonders, on-screen and completely unironically, why police aren’t using “water cannons” to subdue protesters in Ferguson. (Because that was so appropriate and worked so well back in the 60’s.)

Perhaps most tragic and infuriating of all was Tuesday’s shooting of Kajieme Powell, as well as the release of cell-phone video documenting the event. As cogently analyzed by Ezra Klein for Vox:

But there is still something wrong with that video. There is something wrong that the video seems obviously exculpatory to the police and obviously damning to so many who watch it. The dispute over the facts in the Michael Brown case offers the hope that there is a right answer — that Wilson either did clearly the right thing or clearly the wrong thing. The video of the Powell case delivers a harder reality: what the police believe to be the right thing and what the people they serve believe to be the right thing may be very different.

So: I cannot be silent any more. This much I take freely from Orlando Jones. #WeAreAllFerguson, and a core piece of standing up is (as he says both in the video and the accompanying Buzzfeed interview) to “listen without prejudice, love without limits, and reverse the hate.”

However, I know that I stand in the midst of my privilege, in the luxury of being able to “turn on” and “turn off” my awareness of systemic racism as it suits me. Ultimately, these are not my stories to tell. I am not the expert, and my voice should not be the loudest in this conversation.

But here, on JALC, my (white, female, privileged) voice is the only one. And I haven’t quite worked out how to speak authentically from my shoes without then going to that place where it’s all about me and not about the systemic evils of racism and militarization.

So for tonight, I’ll wrap up with a few last resources.

First, a detailed timeline from Josh Voorhees at Slate that presents

a day-by-day accounting of the specific law enforcement actions that exacerbated that pre-existing tension. . . . Here is our best attempt at a Ferguson timeline, with law enforcement behavior that ranges from the rational to the possibly justified to the highly questionable to the downright unconstitutional.

The timeline has links to other articles that drill into specific events or connected issues — if the timeline doesn’t bring you to a boil of outrage on its own, then the linked articles should certainly do the trick. (And if they don’t, then you and I see the world through very different lenses.)

Then two quick links — as much as for my own later reading and my own growth as for anyone else’s:

Listen without limits, love without prejudice, reverse the hate.

And speak up. Stand and be counted.