With one breath, with one flow
You will know
Synchronicity

A sleep trance, a dream dance,
A shared romance,
Synchronicity

A connecting principle,
Linked to the invisible
Almost imperceptible
Something inexpressible.
Science insusceptible
Logic so inflexible
Causally connectible
Yet nothing is invincible.

~ The Police, Synchronicity I

One of the reasons The Cruise was such a treasured experience was that it gave me a chance to touch into the energies of my ancestral lands, at least a little bit. I’m Scottish on one side and Lithuanian on the other, so this trip to the Baltic states was my first-ever chance to explore the Lithuanian side of my heritage.

During our time there, one of our tour guides shared stories from his childhood — both his own experiences growing up as well as myths and folktales that were told to him during his early years. One such story was about the rooster.

Now this caught my attention especially. You see, I was born in the autumn of 1969, which means my animal in the Chinese zodiac is — you guessed it — the rooster.

Still, somewhere in my childhood I saw the list of animals and years and matched my birthdate to the rooster.

Oh, let’s be real. The self-proclaimed online guide to the Chinese zodiac puts things this way:

Most people’s understanding of Chinese astrology and the Chinese zodiac doesn’t extend beyond what they see on the paper placemats that cover the tables of their favorite Chinese restaurants.

Yes, that was me. I can see it in my mind’s eye: a red paper placement with a ring of animal pictures and their associated years around the border. And there was Mr. Rooster sitting at 1969. 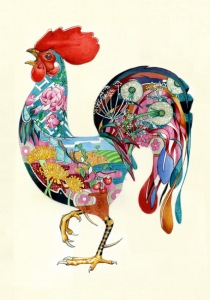 I remember being generally dissatisfied with that match-up. At the time, I don’t think I knew the slightest bit about what types of personality traits were associated with different animals/astrological signs. I was just making a visceral, childish comparison: there were cool animals (dragon, tiger, snake), strong and useful animals (horse, ox, sheep) and lovable animals (rabbit, dog). And then there was the rooster. But at least I wasn’t the rat.

My dissatisfaction with being “a rooster” was so instinctual and unreasoning that my guess, looking back with these decades of perspective, is that I would have disliked whatever sign matched up to me. The habits of comparison and finding myself less-than were just so strong back then, the degree of self-rejection so total, I don’t see myself as being satisfied with any sign that was mine, however glamorous the associated animal.

‘Cos ultimately, I just didn’t want to be me.

So when our tour guide started talking about how the rooster was an especially treasured animal in Lithuanian folk tales, my ears, they perked up. According to his telling, roosters were treasured because they were the one animal not afraid of the devils or demons — in fact, the rooster’s voice was believed to be the one noise that could drive the demons away.

I haven’t found much online to further illuminate or corroborate this snippet of folklore our tour guide mentioned. The closest I’ve found is an entry on this website about different pieces of folklore regarding protection against witches:

During the Middle Ages, the cock was an important Christian symbol of resurrection and vigilance. A rooster represented God, goodness, and lightness. Cocks’ places were earned at the top of buildings, domes, and church steeples. They crowed at the birth and death of Christ, and they herald the dawn, “which brings light to the sins of the night and rouses men to the worship of God.”

Witches Sabbats were dispersed, and enchantments were dissolved, by the crow of a rooster. The rites of Satan ended because the Holy Office of the Church had begun. The 4th-century Christian Latin poet Prudentius sang, “They say that the night-wandering demons, who rejoice in dunnest shades, at the crowing of the cock tremble and scatter in sore affright.” In the time of Saint Benedict, Lauds and Matins were recited at dawn and became known as Gallicinium, or Cock-crow.

Now, as a card-carrying witch myself,* there’s a bit of disconnect between this interpretation and my own beliefs about who needs protecting from whom. But, knowing how often Pagan folklore was folded into medieval Christianity, I don’t think it’s too far of a stretch to imagine one of my Lithuanian fore-mothers, a wise women and a witch, standing against the demons with a rooster on her shoulder.

After all, if Baba Yaga’s hut has hen’s legs, and the goddess Gabija sometimes chooses the form of a rooster for her earthly visits, why not an ancestress with a rooster familiar?

Amazing how a piece of synchronicity can give you a perspective shift, turning an old source of dissatisfaction into something to embrace. To claim.

* Okay, not card-carrying. I’ve lapsed on my membership dues.

One thought on “On Self-Rejection and Synchronicity”