Who knew my response to Burwell v. Hobby Lobby was going to turn out to be a tetralogy? It’s like I’m channeling Douglas Adams when So Long, and Thanks for all the Fish came out. (pour one out for my homies)

Where was I? Oh yeah, the unexpected tetralogy. The elephant in the closet. 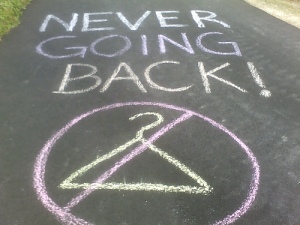 My other posts and link roundups have said a lot about the bad science and reasoning in the Burwell v. Hobby Lobby decision, about the slippery slope of its implications for other targets of prejudice, and the catastrophic implications of the decision insofar as what it suggests about women’s rights and women’s bodies. But I’ve (unconsciously) sidestepped the hot-button issue at the heart of it all: a woman’s right to have an abortion.

Yes, the Supreme Court precedent of Burwell v. Hobby Lobby is now being used to challenge a women’s reproductive rights right pretty much across the board, but the case started with the dividing line the Green family wished to draw between most contraceptives and the four they (incorrectly) believed to be abortifacients. Yes, that belief is factually incorrect, but it does starkly highlight the moral boundary that the Green family (and many other individuals) wants to live within. “This far, but no farther. Preventing pregnancy is okay, but we will not support abortion.”

I’m sure I could find my usual bouquet of articles to quote and synthesize in that way I do when I’m thinking through an issue and saying my piece about it. But that’s not where my head and heart are at tonight.

Instead, a highlighted link to one single article on A is For by actress Martha Plimpton. It’s a long read, and a rich one — Plimpton interweaves the Burwell v. Hobby Lobby decision with McCullen v. Coakley in a way I have thus far been unable to do, and uses both of these SCOTUS decisions as backdrop for a longer discussion of the state of, and absolute need for, abortion rights in the country. Rather than trying to summarize it all, I’m just going to recommend you head on over and read it in its entirety. (Content note: the article includes the famous post-mortem image of Gerri Santoro first printed in Ms. Magazine in 1973. Be prepared.)

I’ll just pull one quote over to here:

So many of us seem to have forgotten what life was like before Roe v. Wade, when women were dying in pools of their own blood. Or were being interrogated on hospital gurneys by police while they were bleeding out during a miscarriage. Or being raped by hack abortionists in unlicensed offices. Or needing hysterectomies because of botched illegal abortions. Or having to wait until too late in their terms because they couldn’t get an abortion in time, being forced to abort in filthy, unsafe, terrifying, life-threatening situations.

So many of us are deluded enough to believe—or have been duped into believing—that advances in women’s rights are the result of a curious flight of fancy that some ill-informed, hysterical woman made us think was a good idea for a minute, and not the excruciating reality of life for women before them. “That buffer zone? That was silly!” “That right to terminate a pregnancy? That was just your imagination, you thinking you need that.” “That contraception mandate? Why, you foolish ninny! Who told you you could have that? A LIBERAL? Ha ha! Rights, schmights. Don’t you know your body is public property?” Ridiculous women and their “needs” fucking up everything for all the fun people.

In the Salon piece I quoted a few times yesterday,* Dawn Johnson reminds us that.

So you need to be vigilant for a few decades of time, and hope that you don’t end up on the wrong side of those 50-50 odds of  unintended pregnancy.

I was four years old when the Roe v. Wade decision affirmed a woman’s right to have an abortion. I may have a few more years of (hypothetical) reproductive life in these old ovaries, but the basic truth is that for all of my sexual maturity, I have known that I had access to contraception and abortion services if I needed them. Yes, the courts have been chipping away at this right almost since the Roe v. Wade decision was first issued, but the core essence of this right held up for all the years I personally had need of it.

The pace of attacks on abortion rights has only been accelerating in the last few years. Exactly what tattered cloth of choice will my niece and her age cohort be inheriting? They are at the start of those thirty years of reproductive life, and I would guess that most of these young women are starting this journey from the perspective of trying to prevent unwanted pregnancies. But they are doing so when access to contraceptives and abortion services are as difficult, as barrier-laden, and as INaccessible as they have ever been in my lifetime.

What sort of compromised freedom are these young women being forced to inherit? And thirty years from now, will their daughters and nieces have any rights left at all?

* Okay, I’m linking to more than one article. You can take the scholar out of school, but you can’t take schoolish habits out of the scholar…

One thought on “The Elephant in the Closet”