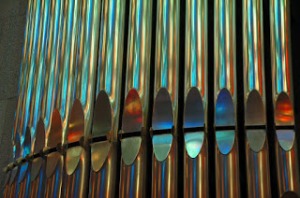 The concert went well. My packing tape hem didn’t deconstruct itself, the choir kept itself together and stayed attentive to our conductor, the soloists were fantastic, and we all muddled through some, er, “imperfections” in how the organist handled her duties.

After we were done singing and we’re listening to the Widor Toccatta that closed out today’s program,* I found myself reflecting on the many ways that involvement with classical choral music so often creates some tight interweaves with the Christian church tradition. After all, so much of the repertory, even up into the 20th century, was written to be a part of the church music tradition. And then there’s all the times community choirs use churches and cathedrals as concert locations.

This was all very present to me as I sat in a pew after singing an oratorio depicting the crucifixion of Jesus Christ, standing on a choral riser right next to a big wooden cross adorned with a crown of thorns and a white linen cloth.**

I am not a Christian. If I had to name my spirituality, I think the closest I could come right now would be to call myself a “UU Buddhist witch.” And yet, here I am, reclaiming my place as part of a musical tradition that is very much Christian.

Not all of it, of course. This particular choir I chose to join caught my eye because they’d programmed a setting of Mary Oliver’s poems by a composer whose e.e. cummings settings I have performed and deeply admired in the past. That greater breadth in programming is one of the things I look for in a choir. But even in a group that looks to widen its programming choices, there’s no escaping a heavy dose of Christianity in the music programming.

And I am so of mixed feelings about it.

On the one hand, much of this repertory is what I “cut my teeth” on since I began training my voice at the age of 9. There’s memory and affection tied up in here. And a lot of it is legitimately beautiful and moving — showing once again how something rooted in authentic creativity can often cross boundaries of historical, national or ideological separation.

And yet. I remain deeply concerned at the ways the narrative of Christianity is still so predominant in the USA. Just a couple of days ago, Alabama’s Supreme Court Chief Justice declared that the First Amendment of the Constitution only protects Christians, because “Buddha didn’t create us, Mohammed didn’t create us, it was the God of the Holy Scriptures.” Now, this is, obviously, both a legal and a historical fallacy, but I find it rather terrifying that a state supreme court justice (chief justice, no less!) would take such an ignorant and narrow-minded position publicly. (And without any negative repercussions, so far. That detail alone should be enough to show the ongoing cultural hegemony of Christianity in the states, today.)

So, in re-engaging with the classical choral tradition, to what degree am I re-opening to my own creativity and expression? To what degree am I showing respect to past composers and their creations, understanding the historical moments and context in which they worked?

And to what degree am I simply complicit in reinforcing the suppressive nature of dominant cultural structures, rather than engaging in resistance or offering counter-narratives?

I don’t know the answer to these questions. But I think I’ll be studying them for some time now. There’ll be another choral season starting in September, and in the meantime, I’m considering trying out for a local music theater production next month.

If I choose to do that (and if I were to get a part), there will be the chance for a whole new study around cultural narratives of gender, love and marriage.

* This organ piece went fine. The bitchy Mezzo in me wonders if the organist spent more time preparing her “spotlight” piece than her accompaniment for our oratorio.

** The crown of thorns I get, but I gotta admit, I’m rather clueless about why the white cloth gets draped there. The shroud he left behind in the tomb?