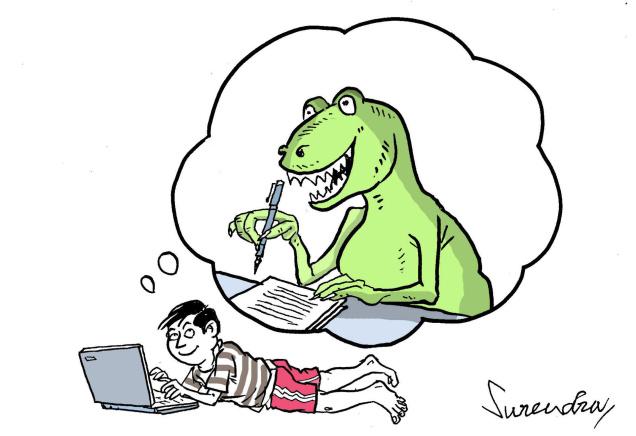 I work in a very laptop-obsessed office. Every meeting we have is vaguely comical: all of us clustered around a table together and making zero eye contact because so many of us are staring at the screen and/or typing busily away taking notes. It’s especially funny in the offices furnished more by a bistro table than an actual conference table — imagine, if you will, some bizarre version of office jenga. 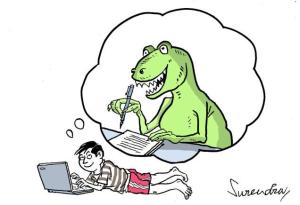 I’m not going to say I’m immune to exhibiting some of these behaviors myself. I carry my laptop into most meetings, in case something comes up in conversation that I need to pull down off a website or pull up out of my email or the document server. But unless I’m capturing the formal minutes of a meeting, I don’t usually use the computer to take notes. Instead, I use the old-fashioned tools of pen and paper.

Yes, I know: this makes me a veritable dinosaur in the contemporary work world. I’ve even read a viciously dismissive article by an Evernote aficionado* that talks about how anyone who takes pen and paper notes automatically loses her respect:

I knew right away, when you walked in here with a paper notebook — a paper notebook! — I realized that this meeting was not going to be a good use of our time. . . . You could be one of those romantic types who say that the visceral process of putting pen on paper liberates your creativity and engages lateral thinking. If you’re an after-hours poet, then, yes, that paper notebook will come in handy. For this, though, can you please go back and grab your laptop?

I’ve tried multiple times to adopt electronic note-taking methods. Nothing yet has worked to my satisfaction. I’m not sure that nothing ever will, and I wouldn’t be surprised to find myself, some stretch of time in the future, trying another technique, another structure, another iPad app, to crack the note-taking enigma.

But for now, I’m at peace with my antiquated habits. Especially now that I’ve tucked away these two articles (one and two) that suggest my handwriting habits may not be such a bad thing after all. Both articles summarize a study done at UCLA (or was it Princeton? the study authors split their affiliations between those two universities, but I’m fuzzier about which campus actually housed the research) comparing the efficacy of typed note-taking versus handwritten notes. As summarized by Wray Herbert in HuffPo:

Those who took notes in longhand, and were able to study, did significantly better than any of the other students in the experiment — better even than the fleet typists who had basically transcribed the lectures. That is, they took fewer notes overall with less verbatim recording, but they nevertheless did better on both factual learning and higher-order conceptual learning. Taken together, these results suggest that longhand notes not only lead to higher quality learning in the first place; they are also a superior strategy for storing new learning for later study. Or, quite possibly, these two effects interact for greater academic performance overall.

The scientists had an additional, intriguing finding. At one point, they told some of the laptop users explicitly not to simply transcribe the lectures word-by-word. This intervention failed completely. The laptop users still made verbatim notes, which diminished their learning. Apparently there is something about typing that leads to mindless processing. And there is something about ink and paper that prompts students to go beyond merely hearing and recording new information — and instead to process and reframe information in their own words.

Take that, bitchy Evernote ambassador! Science trumps your unfounded assumptions and prejudice! (Actually, science probably won’t do a damn thing to chip away at Ms. Evernote’s preconceptions. We always cling mostly strongly to the myths that are most unfounded.)

Anyhow, I’m sure there’s a connection between my old school pen-and-paperness at work and the continued parallelism of me blogging while maintaining a pen-and-paper journal as well.

Sometimes my diarizing feeds into the blog: keeping a physical journal can help me have space to process and synthesize things prior to presenting them out here. Sometimes the diarizing stays contained on the notebook pages: a place to process things that are too raw, too private, or just too far off-topic to make sense here. So, partly because of the ways it supports my writing on JALC, and partly for how it supports my life outside of here, I see myself happily filling more notebooks with pen-scribbles for years to come.

* Who is oh-so-coincidentally hawking her own “How to Use Evernote Effectively” e-book.