It may seem odd to learn that I am building myself quite the collection of wigs.

Or maybe that doesn’t seem odd at all, given my theatrical pursuits. It’s almost inevitable, when you contemplate the number of B’way musicals that take place in various historical times and places. Cross-reference that against my stubborn insistence that I don’t feel like myself without a super-short pixie cut, and wigs become de riguer for faking my way into the settings of most musicals. 1920s, 1860s, 1890s…they all require wigs.

Luckily enough, I’m able to recycle some of these for different shows: the top record thus far is 1 wig that has been used for 3 different shows set in the 19th century. I haven’t even bothered to take it out of its snood between productions. Still, new roles and new concepts mean I keep adding to the collection here and there.

END_OF_DOCUMENT_TOKEN_TO_BE_REPLACED 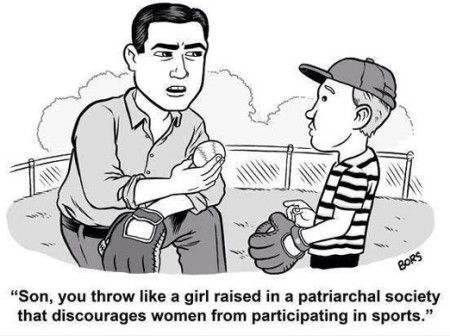 Although it was all over my Facebook wall a month or so ago, I never forwarded the Always #LikeAGirl ad before today, nor did I choose to say anything on JALC about it.

My hesitation was similar* to that when Pantene urged women “Don’t let labels hold you back” several months ago, in an ad Sheryl Sandberg helped take epically viral, or when the Dove “Real Beauty Sketches” ad went epically viral some months before that:

My feelings about these female empowerment ad campaigns are always pretty similar, one to the next. Basically, I feel conflicted. On the one hand, these ads do bring up aspects of my own lived experience, whether it’s the double standards I’ve faced around being “bossy” or “bitchy,” or my habit of being hyper-self-critical, around my physical appearance and, sometimes, pretty much everything else about me.

On the other hand, it’s a little bit galling — okay, a lot galling — to have these quasi-empowering “accept yourself” messages come from companies for whom a significant percentage of the profit margin is based on the proposition that women will feel bad enough about themselves to buy your product so that we can be groomed, tweezed, moisturized or shampooed in such a way as to overcome our innate debased female-ness and become more socially acceptable.

Quite frankly, my conflicted feelings about this trend have reached a high enough level that I never even bothered to watch the Always ad above, or Pantene’s went-viral-one-month-ago “Sorry Not Sorry” ad before tonight when I was preparing this post for JALC.

So, yeah, I’ve never been in the corner of Dr. Bernice Ledbetter, who writes over on HuffPo that these ads are “truly a banner in the battleground of the feminist movement.”

I actually find that perspective quite sincerely and incredibly baffling. Do you not see how the women in the Dove ad are mostly, white, thin, not-too-old, and conventionally attractive to such a degree that the deeper message of the piece can easily function as little more than “The hearts of conventionally beautiful women can grow a little warmer today”? Can you explain to me how women getting shinier, bouncier hair is a viable solution for misogynist attitudes and prejudices against female intelligence, agency and ambition? As Emily Shire observes about the #LikeAGirl ad:

Yes, it’s far more appealing on the surface to have pads and tampons promoted as somehow part of a larger goal to change the meaning of “like a girl.” But the campaign is shamelessly emotionally exploitative. It demonstrates real problems—femaleness as a derogatory statement, decrease in self-confidence as women mature—in a beautiful and clear way, but then pretends a corporate manufacturer of panty liners meant to “help you feel fresh ever day” can solve them.

(And again, notice here how problems that are deeply-rooted and systemic, based in cultural norms, problems that are perpetuated and policed as much by external messages as by internalized ones — the very nature of what I call “the miasma of misogyny” — are presented as something to be solved by women’s policing of their femaleness and their female bodies.)

And yet, however much I’m able to see the problematics in these “short films,” their innate and even troubling limitations, I still admit I kind of like them. My affection hasn’t been strong enough for me to join in amplifying their viral distribution, or perhaps my awareness of the flaws has been too strong to allow me to join in the fun. But I don’t have it in me to work up the same kind of feminist outrage about these ads as I’ve displayed here on other occasions.

Which is why I so appreciate Natalie Baker over at Bitch Magazine for reminding me today that it’s possible to live in a yes/and rather than an either/or place.**

So here we are, once again, stuck in another good vs. not good enough debate: either these ads are radically tackling sexism through a historically appalling medium or it doesn’t matter what these ads say because corporations don’t actually care and will say anything to make a buck.

What if it’s both? That is to say, what if these companies are forwarding feminist messaging despite not actually caring about it? And what if that still helps us?

Like Jezebel said back when the Always ad was first released:

While all ad companies are bullshit liars to a point, willing to do or say whatever it takes to get your money, I would rather have empowerment cheese over shame-based guilt, which seems to be the two usual suspects in a capitalist economy.

That’s a sentiment I can get on board with, especially when I think back to Super Bowl Sunday’s usual dreck. To return to Baker:***

For those of us who surround ourselves with intersectional anti-oppressive ideology, what’s considered progress in the mainstream can feel like a joke. But that’s our piece of the jigsaw—to be progressive is by definition to be ahead of the curve. While we don’t need to be naively over-celebratory about billion-dollar conglomerates pandering to female consumers, I do get immense enjoyment from the fact that such companies are doing so, not because they want to, but because they have to. . . . I can get down with those messages, even when they’re being generated out of corporations’ self-interest.

In fact, I like that they’re doing it out of self-interest. I don’t want feminism to be charity. I want companies to consider supporting feminism to be necessary for their survival. 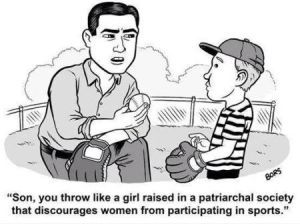 Yeah, it’s all advertising, so at some core level it’s all inherently corporatized and bullshit on account of that perspective. On the other hand, if the growing prevalence of these ads indicates (and even encourages) movement towards the tipping point when the patriarchy/kyriarchy transmutes? I can get on board with that.

So, maybe less of a banner moment (sorry, Dr. Ledbetter!) and perhaps more of a weathervane. Showing the shifts in the cultural currents, a change in the wind of how people think and talk and feel.

* Okay, my hesitation was a little different because I hadn’t yet revived JALC, so I didn’t have to make the “blog or not to blog” call on it. Just the (arguably more public) “to Facebook or not to Facebook” call.

** Yes, this was posted 3 days ago, but I read it today. As such, she reminded me today. And I am grateful for that.

*** In case I haven’t said so clearly enough, please go read the entire post in its entirety. All of it.